Blizzard’s 2012 smash hit, Diablo III, is still showing signs of life to this day – largely helped by the fact that the game is still receiving occasional content updates. These content updates often come in the form of a new Season, and in the light of Diablo IV and Diablo Immortal coming out, as well as Diablo 2 getting a remaster soon, there was a new Season update released for Diablo III recently.

One such update, patch 2.5.0 released back in 2017, added a new type of item, the Primal Ancient Legendary items. 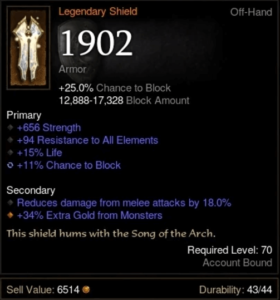 What are Primal Ancient Legendary items in Diablo III?

As any other ARPG, Diablo III is heavily driven by character customization which is achieved in large part thanks to itemization. It is exactly this process of grinding for more new and better items that has helped keep the game alive for so long – to reiterate, the game is 9 years old and still going at this point. Back in 2017, the overall impressions of the game were starting to become negative, and the players complained that the grind was becoming a bit stale. As a direct result of this, Blizzard devs decided to try and shake things up, and they chose to change the process of grinding for items in order to achieve this.

Since the game is all about grinding out better gear with bigger numbers, Diablo III developers decided to – as you may have guessed by now – include items with even bigger and better stats. Prior to this update, the best items you could get in the game were so-called Ancient Legendary items. These items were pretty much mirrors of the usual Legendary items with the caveat of having better stats on them (pretty much all of the base attributes would have bigger numbers associated with them, excluding percentage-based affixes). Primal Ancient Legendary items took this a step further by guaranteeing that you’ll get a perfect roll on the stats of any such item that drops.

Another benefit to Ancient and Primal Ancient Legendary items is the fact that they’ll most likely have the stats tailored to the character class you’re playing – so, for example, if you were playing a Demon Hunter, you’d get items that have a high Dexterity stat on them, which is super neat. Speaking of super neat things, set items can also be dropped as Ancient and Primal Ancient items – so you can go off the charts with min-maxing.

How do I get my hands on those sweet Primal Ancient Legendary items?

As with the usual Ancient Legendary items, they’ll only drop for characters who have reached level 70 (which you’re going to be aiming for either way, in order to access the Normal and Greater Rifts), and they’ll only drop if you’re on a difficulty level of Torment I or higher. Primal Ancient Legendary items will also drop from any other source that has a chance to drop Legendary items – this includes gambling blood shards at Kadala, Horadric Caches gained through completing Act Bounties, as well as Kanai’s Cube. Before they start dropping, however, you’ll need to complete at least a level 70 Greater Rift – and without your buddies carrying you through – you’ll need to finish it solo (which admittedly shouldn’t be much trouble, provided the build you’re using is somewhat viable). The biggest boon of these items is the fact that, besides having a perfect roll on all of the stats and affixes, they also have a perfect roll on the item’s Legendary Power. You’ll know a Primal Ancient Legendary item dropped for you if you see a giant red beam going out of it – but don’t expect to get too used to seeing this; the drop chances for Primal Ancient Legendary items can be rather low. 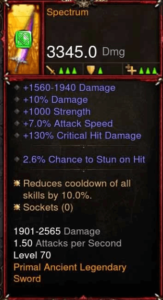 Do I need Primal Ancient Legendary items in order for my character to be viable?

Of course, having a full set of Primal Ancient Legendary items along with a large number of Paragon points will help push you through to even higher Greater Rift levels, should you have the patience to grind for it.

Not anymore! Well, sort of – the most recent Season of Diablo III, Season 24, added Ethereal items to the game. Ethereal items are a new weapon type that players can grind for, which can roll a set of powerful affixes, as well as a random Class Weapon Legendary Power and a random Class Passive Power. Each class has 3 unique Ethereal items associated with it. Unfortunately, Ethereal items can’t be Enchanted, transmogrified, Dyed, Reforged, or traded with other players (they’re account-bound), but they can indeed be augmented through Kanai’s Cube. The downside to Ethereal items is the fact that they’ll only drop in Seasonal play, and won’t be transferred to non-seasonal characters upon the end of Season 24.

If you’d like to see Ethereal items stay in Diablo III (which would certainly help keep the game fresher, as they’re a lot of fun to grind for and use), you can join the Reddit discussion in which the players are requesting just that in order to let Blizzard know what you want.

Otherwise, now that you’re all caught up to speed on Primal Ancient Legendary items (and Ethereals, if you’re a seasonal player), go on out there, farm some Greater Rifts, and experience the power of these items for yourself