Tech giants like Sony and Microsoft have always put their noses into every industry possible, and this especially holds true for gaming. With their success in console making, with Sony’s PlayStation and Microsoft’s Xbox, respectfully, other companies, as well as the PC industry have often fallen short with their projects. But, there is one company that always kept to itself and its style, which is why it still holds strong, with millions of fans worldwide. This, of course, is Nintendo, represented by their latest and highly successful console Nintendo Switch.

Nintendo has a long-lasting tradition of crafting unique consoles, like the Gamecube, Super Nintendo (SNES), Wii, or Wii U, as well as the games for these consoles, with the fan-favorite Mario Series, Legend of Zelda series, Pokémon, and many more. The latest console, Switch, brought along some of its own titles and expanded on the games you can play and how you can do it. One of those games, and arguably one of the best multiplayer ones on this console is the Super Mario Party.

This game contains 84 minigames, a total of 20 playable characters, each unique in its own way, four boards, as well as the option of choosing between different game modes. Even though you will be given a certain amount of content, to begin with, in order to fully enjoy the game, you would want to unlock all of it. This might sound difficult, but it truly is not, especially if you know where to look.

Four hidden unplayable characters are called Pom Pom, Dry Bones, Donkey Kong, and Diddy Kong. Pom can be found after completing world 5, but requires unlocking all minigames beforehand; Dry Bones simply appears at the top of the Party Plaza after playing for a while; Donkey Kong can be unlocked by participating in River Survival three times, by taking a different path every turn; and Diddy Kong needs you to complete world 2 of the challenging road to unlock.

This is one of the official boards that the game offers, and the only one that is locked when you first try to play. Luckily, it is fairly simple to unlock it – all you have to do is try out the other three. 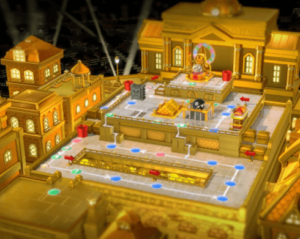 You start off the game with four possible modes. These are Mario Party, Partner Party, Sounds Stage, and River Survival. There exists another mode, called Challenge Road, which is only available after unlocking all of the 84 minigames provided in the game. Getting the minigames that you have not played is a tricky task, as it requires sheer luck (although not much of it), and the player going through all of the modes several times until they do. In order to check on your progress and get some help on where to actually look for specific minigames, it is advised to visit the right side of the plaza. There, all of the unlocked minigames can be seen, as well as the ones that are not, labeled with a question mark.

There are some smaller modes to unlock as well. Toad’s Rec Room unlocks after playing one match in Mario Party, where you can gain Party Points. This is, of course, not exclusive to this mode, as playing any game gains you a specific number of PPs, which you can spend in the center of the Party Plaza. Once you collect enough, navigate to the left from the Party Plaza, until you reach the red warp pipe. After reaching Kamek, who is waiting there, you will gain access to the Sticker Room, another small game mode. 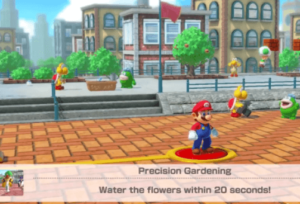 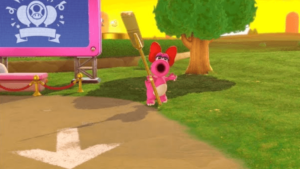 One final thing, which does not seem too significant, is the Gold Oar. It requires the Gem of Courage and talking to Birdo, a fun little character in the game. This oar serves to help you out as you go back through the River Survival, as well to give you the satisfaction of unlocking everything in the game that provides so much.

To conclude, choosing to play this game will bring tremendous joy, so… Let’s play.

For more details, you can watch this Super Mario Party video by Nintendo.